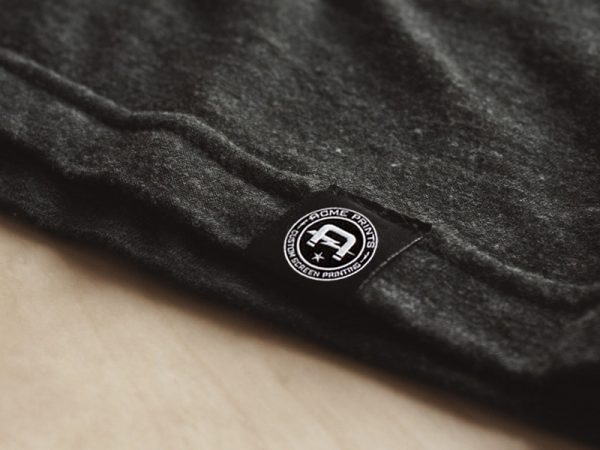 Discharge Printing: Part One – An introduction to how it works

Standard silk screening has traditionally been done using plastisol inks, which are plastic/ oil based.  Discharge inks can be either a hybrid of plastisol and water based, by mixing plasti-charge with a plastisol color or could be a water based discharge ink.  Sounds confusing, but I will do my best to educate you on the differences in a three-part discussion.   Part one is a basic introduction into what discharge ink is and its strengths and limitations will be covered in the subsequent parts.

Discharge inks are made to work best on 100% cotton shirts and gets printed the same way standard inks are done, through a screen.  The difference is that instead of sitting on top of the shirt fabric, discharge inks will remove the original dye color of the shirt and re-dye the fabrics the color you are printing.  For example, if you used yellow discharge ink and printed it onto a black cotton shirt, the areas where your image are would now be permanently turned yellow in the shirt fibers instead of black.  Standard plastisol inks will sit on top of the garment and over time  may crack and break up.  Properly cured plastisol will retain integrity for quite some time, but I’m sure you have a tee that you’ve owned for years that eventually falls apart.  Discharge inks will never crack and your design’s integrity will remain until the shirt has worn down to rags, without ever breaking up.

Discharge inks are most commonly used on darker garments and water based would be used onto a light color garment.  White ink on a black shirt would be done in discharge, while a white shirt with a black print, would have water based black printed.  Discharge inks allow you to forgo the need or an underbase.  We all have owned that black tee with heavy white ink on it that feels like a thousand pounds and wears terribly.  A black tee printed with white discharge would be priced as a one color and would have a bright white, while a black shirt with white plastisol inks would need to be priced as a 2 color, because it needs to be hit with white ink two times to make it bright.  Although discharge inks can be priced slightly higher than traditional inks, a 1 color discharge print is cheaper than a 2 color plastisol print.

Once a shirt has been printed with discharge inks, there is a slight hand to the designs that can be felt.  After it’s first washing, the hand (feel of the ink) will disappear and the shirt will feel as if you had a blank t-shirt on it.  Even with a 20” tall, 4 color print, it will wear like a shirt with no print on it.  This is accomplished because the ink has re-dyed the actual cotton fibers, instead of resting on top of them.  Printing with discharge inks can be very tricky and may have some restrictions, but those restrictions can also be used beneficially to create certain looks unattainable with standard inks.  More on that will be discussed in part two, as well as why discharge inks are meant to be used on 100% cotton.

The image below was printed at Acme Prints with discharge ink onto a 100% cotton next level tee.  Although the art is 14” wide x 20” tall, after it’s been washed one time, it will feel like a blank shirt, yet the printed image will look the same after washing.

Sorry, the comment form is closed at this time.

Subscribe to be the first to hear about deals, offers and upcoming collections.